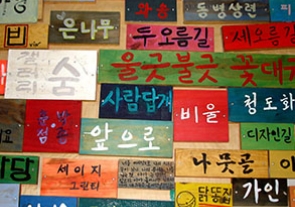 "The Beauty of Hangeul" © Philippe and Delph Pogg

EALC Graduate Student Statement on Hate Crimes against Asians and Asian Americans in the US
Read more.

Roundtable: International Students at a Crossroads- Their Roles and Experiences in US Higher Education Past, Present, and Future
The EALC Department hosted a roundtable on July 24. For information about this event, read more

Andrew F. Jones awarded 2015 Guggenheim Fellowship
Andrew F. Jones, professor and Louis B. Agassiz Chair in Chinese in the Department of East Asian Languages and Cultures, has been awarded a 2015 Guggenheim Fellowship for his research project on Circuit Listening: Chinese Popular Music in the Transistor Era. He is one of only 175 scholars, scientists, and artists nationally, and three Berkeley faculty, to receive this honor. Read More